Sometimes it might seem like the endless traffic lights, signs and markings on the roadways are unnecessary. Who decides what signage is needed and not? How are traffic lights timed? Is anything ever done in the case of special events?

Here in Macomb County, it’s John Abraham who is often making the decisions related to those questions and many more. As the director of traffic and operations for Macomb County, Abraham oversees the county’s Engineering Department and Traffic Operations Center, commonly referred to as the TOC, which is located in COMTEC in the Department of Roads building. The TOC employs two operators, six engineers and three technicians. The two operators are charged with overseeing the day-to-day flow of traffic in Macomb County’s intersections. Abraham says whenever there is a traffic backup, the operators can alert the engineers who have the ability to adjust the length of the traffic lights at the affected intersection. Traffic backups often either happen from a car accident, or during a special event, such as the Selfridge Air Show or the Partridge Creek tree lighting. Staff meet with event promoters in the weeks leading up to the event to ensure that traffic is handled smoothly. Normally traffic lights are pre-programmed to go with traffic flows that are most popular during certain times of the day.

The center also gets about 1,000 calls a year from residents who have concerns regarding traffic lights, pavement markings and signage. The TOC’s three technicians attend to any fixes that need to be made in regard to broken traffic signals, antennas and any other such equipment. There are about 770 intersections in Macomb County that need to be maintained.

Abraham is proud of the TOC, which went from a room with six monitors to a 50-by-20-foot video wall.

“We are one of the most advanced TOC’s in the state and nation for a local agency such as ours,” said Abraham, who called the building the “nerve center for the county.” “We have something spectacular under budget.”

The TOC is part of Macomb County’s COMTEC building, which contains the Department of Roads, Emergency Management, Information Technology and the Macomb County Sheriff, Clinton Township and Sterling Heights dispatch. Abraham said having all of the departments in one building allows for smooth working relations between four groups that often have to work closely together. It was also just announced that COMTEC operated under budget this past year, proving its success.

Abraham worked for the city of Troy for 12 years as a city traffic engineer, then as a traffic and transportation manager for the city of Anaheim, California for a few years before accepting the job at COMTEC.

In his spare time, Abraham, who has two daughters – one in college and the other in high school – and has been married for 22 years, is an avid photographer and active with a church in Warren.

“I like sharing the nice things in Detroit,” he said, adding that there’s too much negativity about the Detroit area. “I have my camera with me all of the time.” 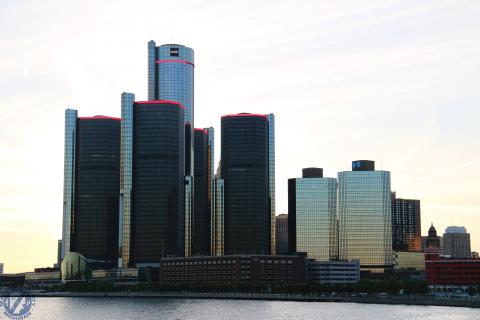 Abraham takes his job at the TOC seriously. He said he often has to make decisions between safety and efficiency, with safety always winning out.

“If the practices are not safe enough, we will not employ them,” he said. “Our job is to make sure fathers and mothers get home safe to their families.”