Born in Mount Clemens in 1919, George Caram Steeh was the son of Caram and Dora (Lappin) Steeh. George’s immigrant parents played a major role in the shaping of his remarkable career. Their values regarding hard work and the importance of a good education greatly contributed to his success. 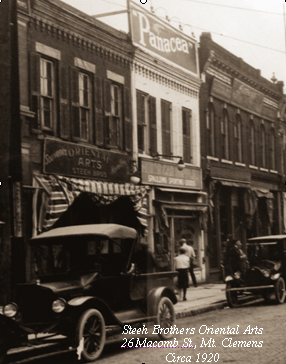 Caram George Steeh, born June 26, 1886 in Mersine, Turkey, came to the United States aboard the Lazio on September 1, 1907.  He began his career with Tadross & Zahloute, an Oriental rug company in New York, under the guidance of Naumi Tadross’s nephews Naseem and Saliba Zahloute. In 1911, Zalhoute & Company opened an Oriental rug store at 31 Front Street (now N. Gratiot) in Mount Clemens where Caram was employed. Tadross & Zahloute moved their business to Detroit, and Caram and his brother, Tofie, opened the Steeh Brothers Oriental Goods Company in 1912. By 1920, the brothers also operated The Steeh Brothers Oriental Store in Saginaw at 106 Washington Avenue.

Caram married Dora Lappin of Tripoli, Lebanon in 1916, who had immigrated to this country as a child; they were founding members of the St. Mary’s Syrian Orthodox Church of Detroit.  Caram continued his business in the Oriental Shop until 1933, when he opened Steeh’s Women’s Apparel Shop at 82 Macomb Street. His brother Tofie opened Freda’s Dress Shop around 1929, which later became the Campus Shop under the guidance of his son, Lawrence.

George grew up with his brother, Victor, and four Syrian foster sisters.  The Steeh’s adopted the oldest daughter of the Hadad family around 1930 through the Children’s Aide Society, and soon united her with her three siblings. 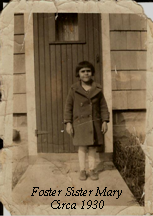 In 1938, George graduated from Mount Clemens High School.  His senior yearbook tells a great deal about his character. He was elected president of his class, and was also named most accommodating boy, most typical high school student, best mixer, best actor, peppiest boy and the boy who had done the most for the school. He also played football, was a member of the Hi-Y Club,  student council, Junior Red Cross, Masque and Wig Club, Junior Civic League, circus club, debate club, and the readers club.

George and his foster sister Mary worked as clerks at the S.S. Kresge store in 1940 prior to George’s enrollment at the University of Michigan (U of M). It was there that he met Barbara Young, daughter of Professor Emeritus Leigh Young of U of M, and the couple married on July 18, 1941. He received his bachelor’s degree in 1942 and then enlisted in the Navy where he served on the USS Irwin. He received his law degree in 1949 from U of M, then returned to Mount Clemens where he joined Hugh Neale’s law firm. 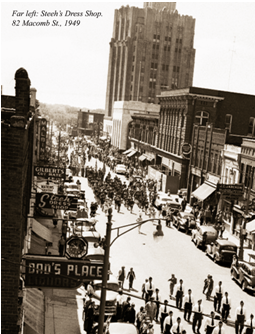 In 1954, he ran on the Democratic ticket for State Representative of the third district where he defeated Kenneth

Sanborn by 538 votes, after which the two formed a lifelong friendship. He served as state senator from the 11th district from 1957 – 1962, and then was appointed judge of the 41-B District Court by Republican Gov. William Milliken. 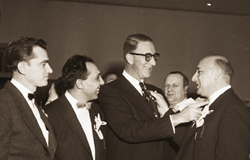 In 1988, George Steeh III was appointed to the same district court, making them the first father and son to serve on the bench together.  After retiring in 1991, George continued to act as a visiting judge until a few years ago. 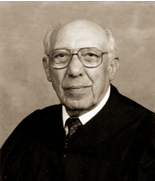 George and Barbara had five children: Judith, George III, Richard, Edward, and Robert. Barbara passed away in 1971 and in 1973, George married Jane (Kelsey) Fahmer, who passed away in 2011. George was also the proud step-father of three, had 14 grandchildren and 14 great-grandchildren. In addition to his long list of accomplishments, George was also known as a kind, gentle man with a warm sense of humor.