On July 20, 1782, Moravian Missionaries David Zeisberger and Johann Jungman set forth from Fort Detroit with 19 Christian Delaware Indian brethren and sisters to form a new colony on the Riviere aux Hurons. Both the river and township were originally called Huron. The names were changed to Clinton in 1824. Following the path of the river, they found their new colony that British Colonel Arent Schuyloer DePeyster had selected for them with the approval of the Chippewa Indians. Here they would be allowed to live until peace was made between the United States and the British during the Revolutionary War. Today this area is located on Moxon Drive just off of Moravian. 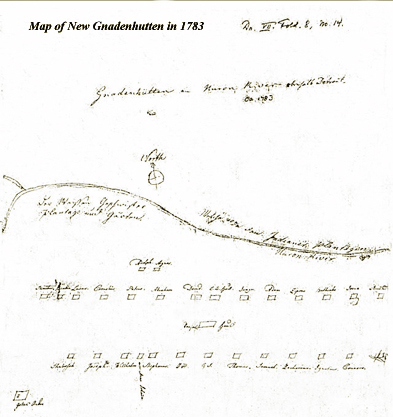 They were met by mosquitoes, which gave them little rest. The Moravians initially pitched tents and then erected huts, which, in time, became substantial cabins. They laid out their gardens, built fences, stables and out-buildings, and, in November, they completed their new church. They named their settlement New Gnadenhutten, meaning “Tents of Grace.”

There they were joined by Richard Conner and his family and by Christmas 1783, according to Zeisbergers diary, there were 53 settlers “white and brown.” One of the new members of the group was Richard Conner’s daughter Susannah, who was thought to be the first child born to English-speaking parents in Macomb County.

The winter of 1783-84 was exceptionally brutal; frost set in early and the snow was 6-feet deep, which prevented hunting. The ice on the river didn’t break until April 4, and Lake St. Clair was not free until May. They were saved from famine only by a large herd of deer that came their way.

On December 19, 1785, the Indian brethren went “to lay out and make a new and straight road to Detroit.” This 23 ½ mile “wagonway” to Detroit, now called Moravian Road, was the first inland roadway in the state of Michigan.

At this point, the “heathen” Chippewa Indians wanted their chief hunting grounds back and the Moravians were forced to move again. On Thursday, April 25, 1786, the congregation met for the last time in the little New Gnadenhutten chapel. They loaded up their canoes and headed back to Detroit, then took two sailing vessels to the banks of the Cuyahoga River in Ohio.  There they stayed for a brief period, finally locating in Fairfield on the Thames, Chatham, Ontario.

The only one left behind was Richard Conner and his family. Richard remained there until his death in 1808.  The property and its improvements were sold to Major Ancrum, British Commandant of Fort Detroit and John Askin, the trader, for $450.

In 1913, the Alexander Macomb Chapter of the Daughters of the American Revolution erected a large boulder on a cement and stone foundation on the Moravian settlement site in their honor. In 1962, the boulder was moved to the Clinton Grove Cemetery to allow more access to the public.

In 2008, at the dedication of the George George Memorial Park adjacent to the old Moravian site, members of the Delaware Indians were present that traced their ancestry back to the original inhabitants of the Moravian village.