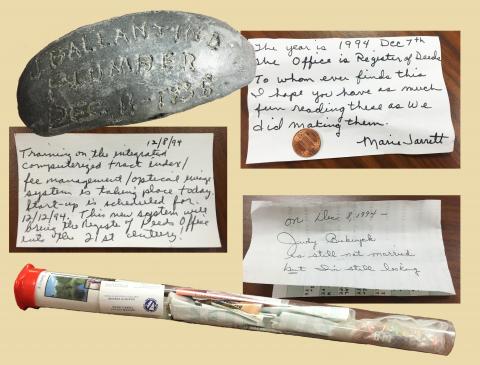 During the recent demolition of the Old Macomb County Building interior, there were a couple of interesting pieces of history discovered. One item found was inside a pipe chase on the eighth floor. Workers from the Global Green Services Group found a gray concrete stone with a message etched on the top that read “James W. Ballantine, Plumber; December 5, 1935.”

Ballantine, a local plumber and steamfitter, was born in Detroit in 1867, the son of a British plumbing contractor. A successful businessman, he had also installed the plumbing in the J. L. Hudson Building in Detroit. He lived with his family on Madison Street in Mount Clemens, and had a plumbing shop in his backyard. Sadly, James passed away from pneumonia at the age of 68, just 23 days after placing the stone in place where it would lie undisturbed for 80 years.

The original plumbing, heating and ventilating contractor for the construction of the Old County Building was Frederick H. Hatzenbuhler. He was hired for the job on March 13, 1931, but by the fall of that same year the county coffers were dry. On November 17, 1931 the county terminated general contractor Otto Misch’s contract, along with Grey Electric and the Otis Elevator Company, owing them a balance of $95,000 ($1,385,536.64 in today’s value). This left the building without a roof and unprotected from the elements.

Hatzenbuhler’s contract was the only one still in force. With the county still owing him a balance of $326.64, he signed a new contract in January to provide the sheet lead roof flanges, ventilators, flashings and air intake flashings on the facility.

Hatzenbuhler passed away suddenly on February 14, 1932. His obituary stated that the pressure from the difficulties surrounding the contract with the county and the uncertainties of its status probably led to his demise.  His son, Howard, continued to run the family plumbing and heating business, and stood by the contract signed by his father.

Another find from the demolition crew was a clear plastic tube that was utilized as a time capsule by county employees in 1994. Enclosed in the tubing was a 1994 county directory and notes from a dozen employees. Joe Tinson from the Register of Deeds wrote that he was “thinking of retiring after 31.6 years; he is in fact now retired. Marie Jarrett (Polly Helzer’s sister), also a Register of Deeds employee at the time, is retired as well. Judy Biebuyck included a note that stated she “is still not married but still looking;” she is now retired and apparently still single.  Brenda Wissman, former Facilities and Operations employee, included a note along with a bag of M&Ms. Sadly, Brenda passed away in 2004. Annette Freeman, who now works for the Finance Department, is the only current employee left that contributed to the time capsule.

The time capsule tube will be placed back in the Old County Building before the completion of the new offices – somewhere where it will again be discovered in years to come.

A few of James Ballantine’s descendants still live in Macomb County, and were eager to learn about their great grandfather. They were happy to provide a new home for “the stone.”