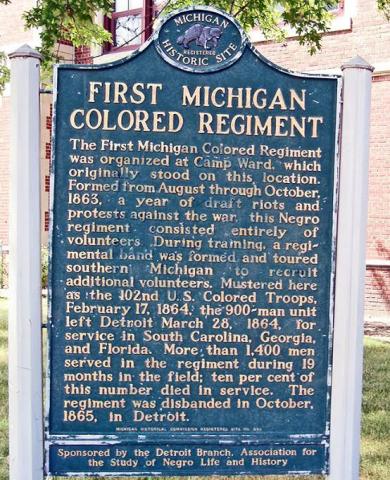 Macomb resident Kinchen Artis’ photograph remains forever etched in our history. It is one of the few pictures in existence of a soldier from Michigan’s 102nd Colored Infantry taken during the Civil War.

Born in Logan County, Ohio on July 15, 1831, Kinchen came to Michigan in the 1840s with his father, Kinchen, Sr., who had brought a Quaker colony of 20 families to Cass County, Michigan. Many of them were former slaves who financed the purchase of their land through a Virginian plantation owner who left his estate to them to purchase land in a free state. Kinchen, Sr. fought in the War of 1812 under North Carolina’s 3rd Regiment, and was descended from a slave freed in 1712. By 1850, many of the Artis family had relocated to northern Macomb County.

On December 19, 1863, Kinchen enlisted in the 1st Colored Infantry, Company H, at Battle Creek, the home of Sojourner Truth. He was promoted to Full Corporal on May 10, 1864, a great honor and highly unusual at the time as nearly all of the other officers of the African American troops were Caucasian.  Kinchen mustered out on September 30, 1865 in North Carolina, and returned to Detroit that same year where he married Caroline Tracy in November. The couple moved to the village of Mount Clemens, then settled in Romeo. Kinchen died on September 18, 1905 from enlargement of the heart and was buried in the Romeo Cemetery.

Other prominent African Americans of Macomb that served during the Civil War were the Egbert and Ebo families. Peter Ebo and Daniel Egbert both served in the 102nd Colored Infantry, Company F, then returned home to Armada and Romeo where they purchased farm land in 1866. It was here where they farmed, raised their families, and were buried.

It wasn’t until May 22, 1863, that the War Department in Washington, D.C. issued General Order 143, creating the Bureau of Colored Troops. A federal law, written in 1792, had barred Negroes from bearing arms for the United States Army. Prior to that time, African Americans had served in the U.S. Army during the Civil War as cooks or as valets for union officers.

Michigan furnished only one troop of African Americans for the Civil War. Initially called the First Michigan Colored Infantry, the men trained at Camp Ward in Detroit from August to October of 1863. They mustered out as the 102nd U.S. Colored Troop. During the 19 months in the field, approximately 1,446 men served in the regiment. Approximately 10 percent were lost in battle.

It is difficult to determine just how many men served in the 102nd from Macomb. Thirteen African Americans served as substitutes for Macomb County men who were drafted, such as future Sheriff Frederick G. Kendrick. Unfortunately records indicate where the person who was drafted was from, but not where those who served for them lived. Additionally, enlistment records show where the person enlisted, which was not necessarily their home. Leeland’s 1882 “History of Macomb County” lists 19 African Americans from Macomb who fought in the Civil War, while the archives of Michigan show records of 15 men from Macomb who served in the 102nd.

One hundred and fifty years ago, these men returned to their homes after bravely serving their country where they fought for freedom and equality. Today, an historical marker honoring the 102nd stands outside the Bunche Elementary Middle School on Macomb Street in Detroit where Camp Ward once stood and re-enactors from the Detroit area portray the 102nd Colored Infantry at various community events, sharing their interest and knowledge with the public. 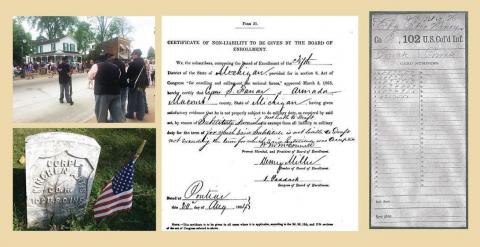